Day 23  Prompt to write a poem about an animal. And I’ve done too many ‘cat’ poems so that today I chose to write about a Billy Goat. I took a scene depicted both by Captain Cook and one of his crewmen. When I say ‘today’ – (I am late.) Had two goat poem I’d written a while back but it wouldn’t be playing the game to use something so out of date. So here I am, a new poem and quite pleased with it. Research is always fun and exciting. To be late at this end of the month is no shame I feel. 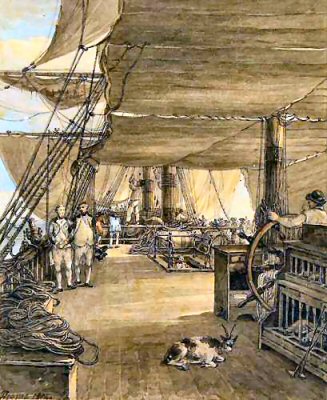 The Goat and a Young Boy’s Vanity

The father had come to trade. To Captain Cook,

in return, offers this Maori man “many little presents.”

To the man’s young son, a shirt of his own. Now,

with no little vanity, the lad shewed of his finery.

swamped in such unfamiliar cloth as to make

some theatre. But theatre, on this ship’s deck,

belongs it would seem to Will the Ram Goat:

and so he rushes the child who is now skid

in dirt and seeking sympathy from his father.

Will the Ram Goat would like it otherwise yet is

restrained while no pity given unto this father’s, (a Chief’s)

and thereby refresh both boy and shirt. Whereupon

that same shirt is wrapped then close in the

While Captain Cook gifted a few goats to Maori

purpose; breeding may be more helpful. And

so in more devious fashion Cook released the

goats in unpeopled bays. Will the Ram Goat

was likely left on deck. Some goat as returned

to their homeland, England; some as not.